skip to main | skip to sidebar

Mary Pat is a Hoarder

We have decided we need to have an intervention for Mary Pat. In case you did not know she was going to park her car in the garage this winter....this did not happen. This is not even close to happening. We have now all (and by all I mean Derek, Myself, Stain, Emily and Foley (we know Jenn and Chris are with us as well) decided that the "black hole" or a garage needs to be cleaned out or Mary Pat needs to go on the show Hoarders. We have all placed bets on the completion date and they are as follows: Mary Pat 12/31/12, Dave 1/1/13, Derek 12/31/14 (he is thinking he will win), Stain 8/31/12 (She has no chance of winning), Foley 1/20/13 (he thinks he will win because Stain moves out before that) , Emily 3/13/13 and myself 2/13/13....Jenn and Chris need to add theirs still and this will be updated once they do.

The rules are price is right rules and the winner gets $90. Add your dates in the comments below!
Posted by TheJohnsonVacation at 10:20 PM No comments:

There is also a 4th category of houses...that which Chris makes.

Bartles out!
Posted by TheJohnsonVacation at 4:48 PM No comments:

Anyone else notice that Chris' blog has a lot of references to poop? I think he needs help.

This is my second annual gingerbread house decorating day. Nothing like taking an already rambunctious family and loading them up with sugar, sugar and more sugar, lightly covered with a coating of fructose and sucrose. Jon's house collapsed under the weight of the candy roof and recognized it for what it.... a pile of candy and gingerbread, which IS kinda the point in the end.

In this family, as in all families, gingerbread builders fall into three camps: 1) create a house that is as realistic as possible using candy for all the typical elements 2) Create a house that is decorated in a symmetrical - or at least creative - pattern, regardless of whether or not it recreates an actual house and 3) Believes that the entire purpose of the house is to serve as a candy carrier. Nothing wrong with either, but the enthusiasm vs. seriousness of the event varies with each. the realistic and pattern builders are far more serious and focus, where as the candy coaters would be content with a sandblaster of M&Ms and NECCO wafers aimed at a frosting covered gingerbread house.

Things are getting almost eerily quiet now... most of the candy coaters are now playing Xbox or already hitting their sugar crash. The others are still focused on their houses. The adults are starting to clean up. I apologize in advance for the green food coloring stains on the kitchen floor....

-Derek
Posted by TheJohnsonVacation at 3:27 PM No comments:

Middle of the end? Or the end of the middle? Or the second time I'm blogging? I don't know. I want to eat some candy.

OK...so besides from being fun, this event has thus far been torturous...I can't eat any of the candy and I like most of the candy here. Emily just interrupted me and is telling everyone I am blogging. I'm going to poop on her house later. She ruins everything. Oh, wait. That's me. Where was I?

I don't remember. I remember one time that I ate some candy from a bag of candy, and I only ate a piece or two, but then the whole bag was gone. Someone ate my candy and punched me in the stomach. Oh, I remember where I was now. Sorry. Diarrhea of the hands or typewriter or keyboard or notebook or whatever.

So I couldn't eat any of the candy I used to make my gingerbread house/unicorn hybrid. I like unicorni. Sounds better than unicorns. Mine came out horribly because the good ideas in my head didn't look good when they actually got made. Plus, I didn't realize that Karyn, Katie, Bethy, Jenn, Emily, Carlye and Carlos take this very seriously. I would have come prepared. I could make bricks like Karyn, or roofs with frosted mini-wheats like Carlos or something that didn't look like it came from Rudolf's butt like everyone else.

They're talking about me blogging. Fooey on all of them.

Back to the issues. I suck at this and, because it's my job, I ruin everything. Johnny's house fell over (I'm hiring him to build Jenn a house), as did Markies, I think. This is a very long middle of the evening/afternoon/day blog.

Bartles out.
Posted by TheJohnsonVacation at 1:55 PM No comments:

The time is now 1:52...eight minutes before the actual start of the day's events that will be described here. I, Christopher Bartles, have already been accused by everyone of ruining everything, which I completely agree with, as well as relish in the fact that I can still work my elite magic. The topic for the day will be making Gingerbread houses. It is the day after Thanksgiving. The day's events have not even begun to unfurl...stay tuned...you will not be dissapointed.

I'd say keep it disney, but I might not be able to if another person tells me I ruin everything. And the Malcs aren't even here yet...bring on the rubber gloves.

Bartles out!
Posted by TheJohnsonVacation at 1:52 PM No comments:

I wrote this back in mid-September and just wanted to post it now that some time has passed...

This blog is usually full of hilarity and craziness from the Johnson family, but today I'm writing about something sad... the passing of Ralph Austin, a.k.a. "Pap-Pap."

Unfortunately, by the time Meghan's and I met, Pap-Pap was what may be considered "past his prime," having already gone through heart surgery and suffering a stroke. But even at that stage, I could see the spark that is so evident in the rest of the family. So while I didn't get a chance to get to know him well, I have gotten to know those who were influenced so heavily by him: his family and friends.

From them and their values, I think I have learned something of what it was like to know Pap-Pap. Among them: a strong sense of family and the importance of friends. A love of laughter and sharing good times. A passion for travel, science, camping and sports. I look at the family that he has helped to create and his imprint is all over: grandchildren who work in the sciences, close-knit families with strong bonds, laughter at every family gathering and even everyone's love for playing and watching sports. I can only imagine his pride in seeing his children and grandchildren (and someday great-grandchildren) carry on those values for other generations, and even into other families.

Even though I didn't know Pap-Pap well and can only know what he was like through those who were influenced by him, I am grateful to him - his values helped to influence a family that I am soon to become part of, and for almost three years has welcomed me with open arms and a warm embrace. At the very least, I'm think he would be glad to know that because of knowing his family, I now enjoy camping and watching soccer games! We'll see if NASCAR is next.

From now on, I will be able to know Pap-Pap the person only through stories and photos, but I will learn more of Ralph Austin - the man, the father, the husband, the grandfather - through the wonderful family he and Nana helped create, and I can't think of a better tribute to him than saying what a wonderful impact he had on those who knew him, and how much the people who love them appreciate it.
Posted by TheJohnsonVacation at 11:00 AM No comments:

With its tower of meat (pronounced mee-aat), not only is it his dream burger, but the best part is that it is too big to microwave the next day.... 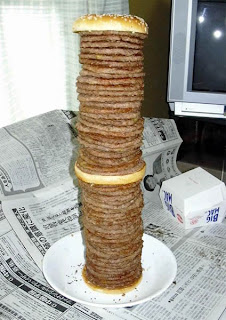 Posted by TheJohnsonVacation at 9:07 AM No comments: